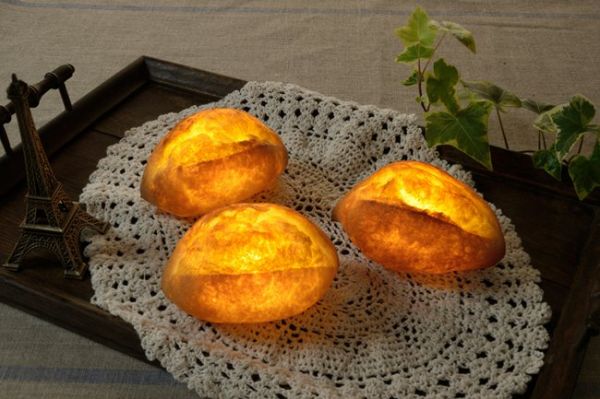 If you were lucky enough to attend the Tokyo Design Week fair recently you may have noticed a very peculiar decorative item: lampshades made to look exactly like bread. Odder still, they’re called Pampshades, combining the English word lampshade with the Japanese word for bread.

The designer, Morita, won’t reveal the recipe other than to say it includes “bread flour, salt, yeast, LED lights and batteries.”  She adds, “I think loaves are really cute. I love their round curves. I wanted a bread display in my room so I could admire it all the time. That’s how I came up with this shape.”

Can you tell what it is yet? A quick guide to contemporary breads

White or brown? Back in the olden days, that was your bread choice. Today things are much more complicated. So what do all the different terms actually mean? Here’s our simple guide to types of bread.

White bread is made from milled wheat, where the outer layers of the grain are removed to create a refined white flour. It contains a much as 50% less fibre than wholegrain and other grainy breads.

Wholemeal bread is different from wholegrain. It involves grinding down wholegrains to a finer texture, leaving most of the fibre intact. Some wholemeal breads also contain refined white flour.

Wholegrain bread is made from whole nutrient-rich grains, commonly including  whole wheat, oats and rye.

Gluten free bread is made from purified or refined starches like maize starch, white rice flour, potato flour or tapioca starch, all low in vitamins and fibre.

Paleo bread, created to fuel the trend for a Palaeolithic diet, combines gluten-free grains, seeds and plant proteins like pea protein. It’s extremely low in carbohydrates with double the protein of wholemeal bread.

I Am Bread: It’s baking-inspired gaming!

Bossa Studios is a British developer of free social network games. Amongst other things, they’ve designed simulators to help train surgeons. But now they’ve diversified into bread, tapping into the nation’s love for toast.

The resulting game is called I Am Bread. It puts you in the shoes of a slice of the good stuff as it travels from the packet to the toaster, described tongue-in-cheek by the designers as an “epic and emotional journey to become toasted.”

Apparently you win points for deliciousness but lose points if you do something daft like dropping your piece of bread on the floor. Or, unaccountably but amusingly, the washing machine or loo! And because the corners of the slices are all mapped to different control keys, it isn’t quite as simple as it seems.

Just for fun, it was allegedly thrown together by a bunch of developers one weekend. There’s no release date for the game, and might never be, but you can check it out on video here.